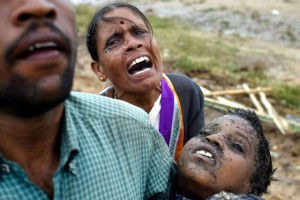 It is several hours before we are ordered to evacuate.  Logan and I are wearing shorts and tee-shirts, both of us caked with sweat and grime when we get onto one of the few remaining boats and cross the backwater.  It is still gasping and heaving, writhing slightly beneath the hull like a dying snake, but we cross without problems and are led to an unfinished college building that has been hastily converted into a sort of refugee camp.  Rumor and speculation permeate air already too thick with moisture and stench to handle the load.  “I heard at least 20 people are dead in the fishing village.”  “5000 people were swept away in Chennai.”  “Thousands of fishermen were lost on the east coast.”  What is going on here?  Is this really happening?”

I wonder if the elephants are ok.  I wonder if our rickshaw driver and his family are ok.  Can all those little girls even swim?  I wonder about the old people and the children playing cards in their thatch-roofed bamboo huts laughing, singing, maybe cooking rice for lunch when suddenly a wall of water came unannounced and uninvited into their living rooms.  How many bodies are out there?  How many are floating amid the trash and battered boats or are wedged under palm trees?  How many babies were lying in their low wooden beds when the sea came?

The college is cramped with evacuated Indians and Western tourists from the Ashram.  There is a woman breast feeding in a hallway, people huddled and eating, resting in corners and against concrete walls.  Dreadlocked white kids sit in circles playing guitars and chanting the mantras of the Ashram.  They all seem to have clean clothes.  What the fuck were you doing?  People were working to save everything they could, people were struggling all around you, people were drowning and you were grabbing your guitars and rolling your pant legs up?  Scrunching your noses at the mud and grime and making your way to the boats?

I see one of the women from the chai shop wandering among them.  She is wide eyed and the filth caked on her face is etched with the trails of forgotten tears.  Her hands hang limp at her sides and her fingers twitch.  A local woman appears out of the tangle of bodies and embraces her.  Her body shakes with fresh sobs.  No one else looks up at them.  The singing continues.

It is the final straw, the final incongruity between the actions of all these Western Buddhist imports and what they profess to believe.  I am so shocked by the selfishness surrounding me that I am driven to act selfishly myself.  Logan and I grab a rick-shaw with some dread-locked hippie California kids who are kind enough to loan us a few rupees and head to town for a comfortable night of getting drunk in a nice hotel and watching the carnage unfold on BBC World News.

The booze does not stifle my confusion.  Shouldn’t I be doing something?  But what?  What can any of us do??  I am haunted by the phrase.  A ghostly refrain in the depths of my mind, mocking my impotence.  It has become my mantra.

It is 24 hours before we are allowed to go back to the Ashram and get our things.  24 hours walking through chalky Indian streets with no shoes.

What can any of us do?

Something.  Anything.  Just try.

Two weeks later I am in Sri Lanka, stoned after a long day looking for a job with the relief effort.  Everyone tells us not to go south.  “They only want doctors and experienced relief workers.”  Eventually we meet a stranger in a bar who gives us an address in Galle.  “Just go.  They need all the help they can get.”  It would mark the beginning of my year in Sri Lanka.  A year of 12 hour work days, bodies, rubble, riots and starvation all around me.  Suddenly everything changed.  The sea had come and forced the current of my life to reverse directions, to back up and overflow into strange new territories.  The banks of my experience were irrevocably breached, and I had no choice but to change direction and find a new course.

Kevin Petrie hails from the soggy wilds of the north western U.S. He drank for charity throughout South Asia and now enables and encourages poor life choices at Café No Sé.