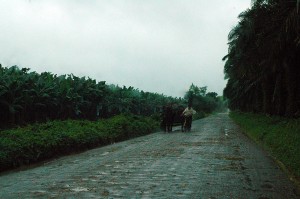 The road to Media Luna is twelve kilometers of thick banana trees heavy with green fruit on one side and wide leafy palms on the other. It is a graded road past Entre Rios on your way to Honduras in the northeastern part of Guatemala where United Fruit once owned much of the land, building an empire across the thick green canopy that stretches endlessly for miles. From the pavement children stand by the side of the road and watch you pass, and tall marsh grasses rise to meet the leaves in this unbroken green that grows over abandoned houses. We turn left just before reaching the Rio Motagua. It is the same river that washed my grandfather’s house away when the rains came in the late 1950s. We don’t get far on the private road we’ve turned onto before we reach a barrier and a guard house. We wait while the short uniformed guard wearing a brown cap slowly walks towards us with a clipboard and pen. The heat is rising, visible as thin wisps of steam from the road after the morning’s rain. We tell the guard we are there to see family. I say: “Neftalí Ramirez, my uncle, we are here to see him.” He’s where the road ends.

When I was twelve years old, I would sit across Neftalí, my Tío Nefta, from his round kitchen table in his small one-bedroom trailer in North Carolina doing my homework as he stared out the cheap lace-trimmed window over my shoulder. He would sit in the pose I remember him most — right leg crossed over left like two stalks completely parallel to one another — and stylishly bend his back and upper body to rest his elbow on his knee. Sometimes it reminded me of a praying mantis bending over a rock. His eyes would grow big and distant and he would begin to talk out loud to himself in a seamless monologue, not even noticing I was there. He would rock back and forth in the chair while holding his knee and then slowly get up to get milk, pour it into a glass, boil some eggs, doing one thing at a time and all the while chatting with himself.

Tired of it, I would look up from my homework, see his back turned to me and as adult-like as I could I would say: “Shh, tío! I’m trying to do my homework!” Surprised by my sudden presence, he would laugh in that playful manner of someone who is caught in a mischievous act. “La Carol! La Carolina!” he would say and would go back to talking to himself, stirring the water until it boiled.

In pictures he would smile only with the right side of his mouth, a half-smile so you couldn’t tell if he was smiling, his wispy mustache meticulously trimmed into an upside down “V”. Right hand on his hip, his thumb behind his belt and the other fingers extended like a fan in front of his pocket, he would bend his leg in and stare directly at the camera. He always looked taller than he was in real life: slim, graceful and his clothes perfectly coordinated.

As the guard inches closer to the driver’s seat the engine begins to hum from the air conditioning turned on high to fight off the heat of a fast approaching noon. My husband, Brad, lowers his window and the humid blanket of air unfurls as do the guard’s fingers on the door. He looks inside the car suspiciously. Inside it’s my American blonde, blue-eyed husband, smiling broadly, me with my digital camera on my lap, a dismantled bicycle with the wheel spinning in the air in the back, and my aunt squeezed tightly against the right back window. Brad signs the clipboard and the guard raises the yellow wooden bar, waves his hands like a broom and we pass. The days of rain have created deep potholes, so we weave along the empty road.

We pass destroyed barracks with graffiti and torn clothing rolled up with mud and trash on the floor that used to be the cement of living quarters, cracked playgrounds, schools and basketball courts that belonged to the United Fruit Company but are now overgrown with weeds, broken asphalt rising like cracked petals in the relentless sun. My family lived here once, picking the bananas, putting them in the trolleys, putting the stickers on as my mother did, boxing them, shipping them out to Puerto Barrios, the armpit of Guatemala, and to the United States to someone’s table. It wasn’t until I lived in the United States after the age of seven that I actually tasted one of those perfect yellow bananas that my family picked.

One day during a reporting trip, I call my mother. She tells me I’m doing it for nothing. “Vas a ver que no va salir nada de eso, y es puro gasto de dinero.” Nothing will come of it, it’s just a waste of money. I am calling from Guatemala, where I have lived for the past ten months doing a fellowship, to her home in Florida. She hates Guatemala, she tells me this often, and if it wasn’t for her sister and now me, then she wouldn’t even bother to land in this cursed country every seven years, which is still too often. Worse still is that I am now wasting my time and money and theirs on Tío. “¡Es un puro sinverguenza! He made his bed and now he can sleep in it.”

Traveler's Journal - A Bull Elephant and a Baked Gringo