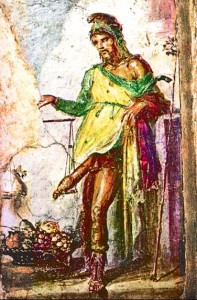 The Femoral Artery is a main artery in the body that runs from the external iliacartery, near the stomach, all the way down both legs. It carries oxygen, among many other things, to the lower half of the body. If you are male you get a hard-on because of this artery, and /or because you are thinking lascivious thoughts. Good for you. The femoral artery is vital to the vascular survival of a person. If cut, an average person will typically bleed to death within 10 or 15 minutes without immediate medical intervention. The above or below average person will also die within 10 to 15 minutes. Whenever the femoral artery is injured, it becomes a life and death situation instantaneously and is a bloody fucking mess.

The Penis is an external sexual organ of certain biologically male organisms, in both vertebrates and invertebrates. The penis is a reproductive organ and, for placental mammals, additionally serves as the external organ of urination. Nature gave us this as an external organ as opposed to an internal organ because it is better to piss outside of yourself than inside yourself. The penis is fun. Men play with their penis all the time and stick them in all sorts of things. Some believe that the penis has a very powerful little brain that overrides the larger brain in the head of the male mammal. This is true. Penises get justly blamed for a lot of things. The word “penis” is taken from the Latin word for “tail.” Prior to the adoption of the Latin word in English the penis was referred to as a “yard”. (See photo  for reason why.) As with nearly any aspect of the human body that is involved in sexual or excretory functions, the word penis is considered funny from a juvenile perspective, and there are many slang words and euphemisms for the penis, such as “cock,” “dick,” “schlong,” “johnson,” “willy,” or “pecker.” In Spanish the word for penis is pene, which is pronounced just like “penne” the pasta. Think of that the next time you order a bowl of penne carbonara.

WTF is the abbreviation for What The Fuck, which is a phrase used to express astonishment. It can be used to express anger, disbelief or an acknowledgement that something is improbable, absurd or exceedingly stupid.

Not too long ago a very good friend of Café No Sé, Randy, who perhaps many of you know, was being disloyal to his favorite watering-hole and drinking in another bar. As should be assumed, Randy was living up to his name in the bar in question and using the limited talents at his disposal to seduce someone into being the object of his randiness. In other words, he was trying his damndest to rut, or to get laid, as it were. Normally, Randy, has a modicum of success in this area, as Antigua is rarely shy of rutt-ees; or should I say, rutt-ettes? But on this particular night, both Randy and his wingman best friend struck out miserably. It may have had something to do with all the Gallos, Cuba Libres and cheap tequila they inhaled in random succession that rendered their questionable charms ever more so. Maybe it was just not their night. In any event they found themselves the very last to stagger from the door of the bar in the very wee hours.

Outside, on the street, Randy struck a match and lit a cigarette while his friend crossed the street towards the car. Randy closed his eyes and inhaled, thinking the night over. Perhaps he should not have told the girl from Denmark that he was hung like a Great Dane. Perhaps he should not have told the girl from Holland that he’d love to see her tulips. Oh well, there was always tomorrow night. Randy exhaled some smoke and opened his eyes, and when he did he saw his friend pissing on his car. Randy said, “Dude, don’t piss on my car.” But the friend kept pissing a healthy-gushing-of-too-many-Gallo piss. Randy pulled his pistol. “Dude,” he said to his friend again, “I’m gonna shoot your dick off if you don’t stop pissing on my car.” The friend kept on. And then…

THE GUN WENT OFF. Some say Randy pulled the trigger. I like to believe he did. Others say it went off by accident. But his friend screamed. “You shot my dick off, and a chunk of my finger, you asshole.”

Randy raced over to his friend. “Dude, holy shit you are missing a piece of your dick. I told you not to piss on my car.” They hopped in Randy’s car and headed to the hospital.

The doctor said to them that the bullet had grazed the flesh just above the femoral artery, and  fortunately nicked the index finger, otherwise it might have taken more that a very tiny piece of flesh from the penis. He was very lucky indeed, the doctor said.  He might have bled to death or been dickless. Then the doctor pointed to the door…

A Wasted Page of Nonsense From Around the World
By Michael Tallon
Thursday, May 14th, 2009