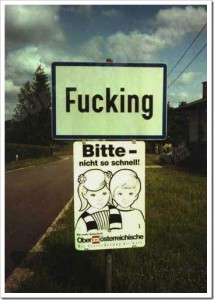 I’ll admit it. I still giggle when someone farts. If someone farts at a funeral, I lose my mind completely in paroxysms of laughter that are completely inappropriate and tend to piss of the surviving relatives. I don’t know what it is. In many ways, I’m a mature, thoughtful guy – but the scatological and the sophomoric still tickle me in the worst way. In fact, one of my favorite bar room stories is about when I accidently called Al Gore a fag. Another is how I spent the evening with a hooker instead of the President of the United States. Drop on by the Café, I’ll fill ya in sometime.

But all of this is by way of introduction. Regular readers of this magazine in general, and this page in particular, may have noticed a theme. Along with farts and famous Democrats (the two having much in common these days) I can’t help but bust a gut when it comes to dirty town names. In our last issue, we featured a photograph of a man standing next to the sign at the city limits of Twatt, England. And this month, as you can see, we’re visiting Fucking, Austria.

The residents of Fucking are less amused, as they have one of the most commonly stolen street signs in the world. In fact, last year the 107 residents of Fucking took a vote to decided if they would change the town’s name, but…, they are a bunch of stubborn Fuckers. The Mayor of Fucking, Franz Meindel, was quoted as saying, “We had a vote last year on whether to rename the town, but decided to keep it as it is. After all, Fucking has existed for 800 years, probably when a Mr Fuck or the Fuck family moved into the area. The ‘ing’ was added as a word for settlement.”

Be that as it may, why they decided to include a “Please Not So Fast Because There Are Children” sign, we will never know.

While the citizens of Fucking would like to be left alone, the good people of Wank, Germany (just about 90 miles down the pike) have decided to embrace their self-pleasuring name. Juergen Stoll, a local entrepreneur, has opened the Wank Guest House from which he sells Post Cards and leads tours through the town – visiting all the most important sites, which, as it turns out, are the town’s many public spaces, such as Wank Mountain, the Wankbahn, and Wank Piste – a trail through the Wank Forest.

How could anyone in the Defense Department have thought that this was a good idea? They started with a reasonable problem for private market engineers to solve. That problem is as follows: in the  future the world’s armies may face battlefields that have been contaminated by biological, chemical or nuclear weapons; yet, those battlefields will still need to be reconnoitered for intelligence, resources and survivors in the days, months and years after the fact. Working from reasonable parameters, a number of private manufacturers designed drones, but confronted the problem of long term fuel sources. We’d think solar, possibly wind… or whatever the hell they do for those Mars drones, but, nope! Thems are silly liberal solutions. The fire in the belly types at the Department of Defense have finally jumped the shark into the world of creepy and horrific. They have settled on a design by the Robotics Technology, Incorporated called the EATR, the Energetically Autonomous Tactical Robot that wields a chainsaw and is powered by “organically based energy sources.” Like people.

After a flurry of bad press, Robotics Technology Incorporated put out a press release announcing that the CHAINSAW WIELDING ROBOTS would only be programmed to eat vegetative waste, not human flesh. Sure.

For the record, Robotics Technology Incorporated has another project called, “The Cognitive Collective” which seeks to develop a “hive like” artificial intelligence in its products.

We’re sure nothing could possible go wrong with this scenario, though, just to be sure, we’re bombarding Linda Hamilton with wedding proposals.

To learn more about Fucking, Wankers or Flesh Eating Robots, please visit us at https://lacuadramagazine.com/category/wtf. We’ve got links galore to help you plan a vacation or for the Armageddon.