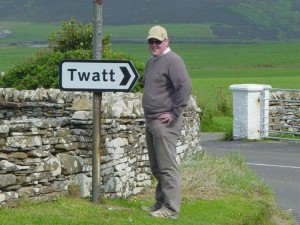 What’s in a Name?

Recently residents of Conisbrough, South Yorkshire, petitioned to have the name of Butt Hole Road changed to Archer’s Way. A denizen of Butt Hole Road, Peter Sutton, who moved into the neighborhood several years ago, at first thought that living on such an unfortunately named lane would be fun, but after half a decade of tourists poking fun at the sign in front of his house – and occasionally dropping trow and posing inelegantly for photo-ops while bent over with their hinders in full view – has soured him on the experience.  His suggestion was to rename the road Button Hole Way, but he is satisfied with the new moniker.

Predictably, an internet campaign has been initiated to return Archer’s Way to it’s “traditional name.” Presumably, this campaign consists largely of individuals who live nowhere near South Yorkshire.

What is a Butt?

In April of 2009 the City Council of Vero Beach, Florida grappled with a question of profound significance to this resort town – what, exactly, is an ass?  In an effort to define how much skin can legally be exposed on public beaches, the council adopted an official definition of the buttocks. According to the august body a butt is “the area of the rear of the body which lies between two imaginary lines running parallel to the ground when a person is standing, the first or top such line drawn at the top of the nates (i.e. the prominence of the muscles running from the back of the hip to the back of the leg) and the second or bottom line drawn at the lowest visible point of this cleavage or the lowest point of the curvature of the fleshy protuberance, whichever is lower.”

Get Off My Mom’s Butt!

The 16-year-old daughter of Melanie Arnold, 34 of Torrington, Mass, heard screaming coming from her mother’s bedroom and was determined to race to her assistance. You can see where this is going, right?

Ms. Arnold’s daughter, whose name has been withheld due to her age, called a few friends who sped to the scene, whereupon they proceeded to charge the mother’s bedroom and grabbed a man who turned out to be Arnold’s ex-boyfriend, Robert Swanson, and proceeded to beat him with their fists and a baseball bat.

Obviously, Ms. Arnold had not been screaming because of an assault. Rather, she was expressing her enthusiasm for the sexual skills of Mr. Swanson.

“Instead of asking what was going on, they assumed and took matters into their own hands,” Ms. Arnold said. “Now they have to learn a lesson.”

Assault charges are pending against the teens. Mr. Swanson agreed with the need to press charges. He, too, believes that the kids need to learn a lesson. He was quoted by the AP as saying, “”What if they fight someone else and those guys don’t walk away? What if they kill somebody? Then they’re going to spend the rest of their lives in jail. These kids need to learn, go through the court system and see if you do something to somebody, you see what happens.”

We just hope that if the kids end up in jail, someone WILL come to their assistance in a similar situation.

Due to limited space, we’ll just give the facts on this story: In Stuttgart, Germany Demetrius Soupolos and his ex-model wife were trying to get pregnant, without success. So Demetrius hired his next door neighbor, a father of two, to sleep with his wife and impregnate her. They signed a contract, and the neighbor, Frank Maus, coupled with Demetrius’ wife, Traute, a total of 72 times, but with no result. Demetrius demanded his money back, the neighbor refused, but offered to take a fertility test to show that he’d been “working” in good faith.

The results of the test turned out to be a surprise to everyone, with the exception of Maus’ wife. As it turned out, Mr. Maus was sterile and his wife had to admit that the two children he’d been raising for years weren’t actually his.

All Stories in W.T.F. are researched for at least 7 minutes on line. We encourage you to send submissions, links and photos of your relatives  to:

A Wasted Page of Nonsense from Around the Globe
By Michael Tallon
Saturday, November 7th, 2009