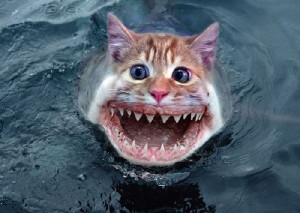 Holly Crawford, 34, of Shickshinny, Pennsylvania, was recently arrested for marketing “Gothic kittens” with ear, neck and tail piercings over the Internet. She has been charged with animal cruelty and conspiracy.

Crawford, a dog groomer by trade, was charged after the Society for the Prevention of Cruelty to Animals (SPCA) of Luzerne County received a tip from People for the Ethical Treatment of Animals (PETA) that the kittens were being sold over eBay for hundreds of dollars.

Crawford has said she will plead not guilty.

The Pennsylvanian businesswoman told the Associated Press that she didn’t see any difference between piercing kittens and piercing people. She insisted that she used sterile needles and the kittens were checked several times a day to make sure they were healing properly.

“When I did it, it wasn’t with any cruel intentions,” said Crawford, of rural Ross Township. “They were definitely loved, well-fed, no fleas, clipped nails. And they were happy.”

Daphna Nachminovitch, a vice president for People for the Ethical Treatment of Animals, called the piercings “barbaric.”

“There’s no excuse for inflicting such pain on an animal that’s the size of your palm,” she said.

SPCA Officer Carol Morrison said the kittens had 14-gauge piercings through their ears and submission rings at the napes of their necks. One kitten’s tail was docked.

Crawford, who, unsurprisingly, sports her own body piercings, said she decided on a whim to pierce the ears and neck of a stray kitten she took in last fall and named Snarley Monster.”

Crawford said her dog-grooming business, Pawside Parlor, has plummeted since the raid and that she has received dozens of nasty phone calls.

Aside from their good work protecting kittens from piercings, PETA has recently found the time to engage in some of the profound silliness that repeatedly makes animal lovers everywhere cringe collectively.

Specifically, they have launched a new project to eliminate the word fish, and to “re-brand” them as Sea-Kittens.

Ashley Byrne of PETA argues that people need to develop a more advanced sense of empathy with our gilled brothers and sisters.

The PETA campaign boasts a colorful, interactive website aimed at children and their parents. It offers Sea -Kitten bedtime stories and a design-your-own Sea-Kitten dress up game in hopes it will build compassion in families. Have a look yourself at http://www.peta.org/sea-kittens.

In a recent interview with some children in an Alaskan fishing village, the Associated Press discovered that PETA may find this rebranding effort an uphill battle. While playing with the Sea Kittens Dress Up Game on the PETA website, Harmony Hanlin, 14, said, “It just doesn’t look right.” Harmony is part of a four generation commercial fishing family. She looked at the cartoon fish and read through the information on the site. Her response was, “They say that they’re intelligent, but they’re not really. They have tiny, tiny little brains. Very miniature.”

PETA has also released a comic book style pamphlet aimed at encouraging children to pressure their parents into caring more for the feelings of fish. The pamphlet is titled, “Your Father Kills Animals.”

It includes the following passage: “Imagine that a man dangles a piece of candy in front of you. As you grab the candy, a huge metal hook stabs through your hand and you’re ripped off the ground. You fight to get away, but it doesn’t do any good. That would be an awful trick to play on someone, wouldn’t it?”

It continues, “Until your Daddy learns that it’s not ‘fun’ to kill, keep your doggies and kitties away from him. He’s so hooked on killing defenseless animals that they could be next!”

Kiddies, they could be next; so La Cuadra suggests that you pierce them up, give them tattoos and teach them how to bite. That’s the only way they’re gonna survive in your house!